Archive for the ‘Monitor Training’ Category

The Friends of the Shenandoah River is pleased to announce it is one of the hosts of 2015 Mid-Atlantic Volunteer Monitoring Conference on August 6-8 at Shenandoah University in Winchester, Virginia. 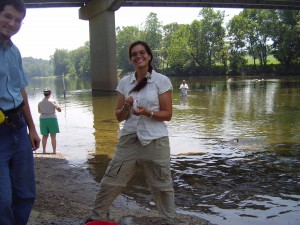 A chance to share and learn form other monitors and programs, this conference will highlight citizen volunteer water monitoring efforts from Delaware, Maryland, Pennsylvania, Virginia, and West Virginia. A variety of special events and breakout sessions have been planned as well. There is an early bird canoe trip scheduled on Thursday, and on Friday evening enjoy screenings at the first biennial Mid-Atlantic Volunteer Monitoring Film Festival.

The director of Virginia’s Department of Environmental Quality, Mr. David Paylor; and Nickolas DiPasquale, Director of the Chesapeake Bay Program are the keynote speakers of the conference.

The importance of volunteer water quality monitoring groups has grown significantly in this day of incessant budget cuts, and the rise of pollution reduction programs. Representatives from state and local government will talk about how helpful our groups have been to them

We are excited that the Saturday program includes two tours of our own water quality laboratory at Shenandoah University named in honor or Fran Endicott . Our local partner, The Downstream Project, will be showing a couple of short videos and sharing the successes of the C Spout Run partnership in the habitat restoration of Clarke County’s Spout Run.

For people not familiar with karst geology and its impact on water quality (certainly not us from the Shenandoah Valley!), there will be a tour of one of our karst cave formations and a discussion of karst and it’s role in our regional history.

So please mark your calendars for those dates, August 6 – 8 and register by July 23 to ensure you have a space for the conference! Three local hotels are offering reduced rates.  Details about reserving a room and other conference information is available on Facebook.

A Reference Stream for the Karst Area of Shenandoah Valley

In Virginia, a stream is listed as impaired if it fails to meet the State water quality standards that support the designated uses of all of Virginia’s rivers and streams. If a stream fails to meet a designated use and its associated water quality standard, then the State develops a total maximum daily load (TMDL) for the pollutant that will bring the stream into compliance with water quality standards. One of these designated uses for all of Virginia’s streams is the support of a healthy and diverse population of aquatic life. When streams do not support this designation, a stressor analysis is performed during the TMDL development process.  Once the primary stressor(s) of the biological community is identified, a TMDL is developed for that particular pollutant.  In cases where a numeric water quality criterion does not exist, the stream of interest is compared to a “healthy” reference stream to determine a tolerable pollutant load that will not compromise the biological community.

Other considerations are defined by the use of the water body and can include numeric State-wide water quality standards.  For fresh water contact recreation (wading, swimming, fishing), for example, E.coli bacteria densities are to be less than a prescribed concentration for a defined frequency.

Unfortunately, there are no streams in the karst area of the Shenandoah River valley that DEQ has used as a reference stream for various stressors of the biological community identified in streams throughout the region. And there is a need for at least one or more reference streams because of the large number of streams in the karst area of the Valley that are listed as impaired.

Karst geology imparts a unique hydrology that has a major impact on stream flow and water quality. In the Shenandoah Valley most people live in karst areas and most farming occurs in the karst areas.  Consequently the karst streams receive a strong environmental imprint caused by land use and land cover that is substantially different from mountain streams with low human populations and little or no farming.  However, in the Shenandoah Valley mountain streams are being used as reference streams for karst streams. Comparing karst streams to non karst streams is like comparing apples and oranges. A reference stream should exhibit the qualities that one would expect to find in a stream in a similar environment that is not polluted.

Defining what the standards should be for a reference stream is a challenge.  For many of the karst streams in the Valley the impairments are E. coli bacteria 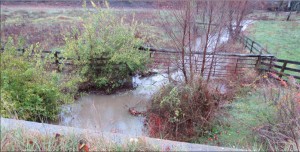 and sediment. Sediment is usually listed as the cause of the lack of benthic diversity. E coli exceedances are typically caused by cattle waste deposited directly in the stream, direct discharge of untreated sewage or wild animal waste, and runoff of manure from pasture and cropland.2014 Monitoring Calendar

The karst streams of the Valley are in sediment that in Clarke County is called Weaver soil. Weaver soil is the result of deposition by precipitation of calcium carbonate dissolved from limestone bedrock and formed when ground water is warmed as it flows from springs into the stream and oxygenated as it flows over riffles and waterfalls.  Ground water comprises more than 90% of all the water that is contributed directly to karst streams because of the permeability of fractured limestone. Thus a stream from which cattle are excluded and which does not receive untreated sewage should represent an example of a stream that is not polluted and could be considered for “reference” stream designation for benthic invertebrates.

Beginning in 1997 the Clarke County Planning Department began a concerted effort to have livestock excluded from the entire 8.87 mile length of Page Brook because it makes up a substantial part of the recharge zone for Prospect Hill Spring. (This spring is the potable water supply source for Millwood, Boyce, Waterloo and White Post ) That effort continues today and is nearing completion. Recent efforts supported by the Lord Fairfax Soil and Water Conservation District, NRCS and local land owners include installing off-stream watering facilities for cattle and stream exclusion.  Approximately 90% of the length of Page Brook is now protected from cattle access. There are only about 20 residences within 1000 feet of Page Brook and there are no known direct sewage discharges. . Based on existing conditions in the Page Brook watershed and recent improvements made to the stream including establishment of a considerable amount of livestock exclusion fencing, it is expected that Page Brook should soon be meeting the bacteria water quality standard under most conditions, ultimately leading to removal of its bacteria impairment in the next several years.

Although streams usually need time to recover after management practices are put into place, the benthic invertebrate communities in Page Brook could, in the future, represent what will be the indigenous benthic communities of a stream in the karst agricultural area of the Valley that has received the best available BMP technology.. Thus the invertebrate community of Page Brook could eventually be considered a reference community for the karst agricultural streams of the Valley.

There have been and continue to be evaluations of Page Brook that can contribute to a bench mark to which other streams can be compared.

During a period from 1995 to 1998 LeAnne E. Astin conducted an evaluation of the benthic invertebrates in the upstream portion of Page Brook west of VA Rt. 617. That work was reported in  Bioassessment of BMP Effectiveness in an Agriculturally Impacted Watershed in Clarke County, VA a Master of Science thesis submitted to George Mason University in 2000.

The Astin report contained three salient points. First, there are no reference streams in the karst area of the Valley.  Second, exclusion of cattle from the stream is necessary for E. Coli reduction. And third, exclusion is needed to improve benthic diversity.  Benthic diversity was noted to recover in a few 1000 feet down stream of the last cattle access. 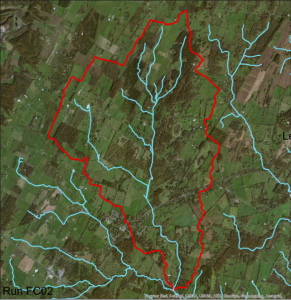 The FOSR data show that the nitrate concentrations in Page Brook are less than 2 mg/l whereas most of the karst streams in the Valley have higher nitrate concentrations. Thus a repeat of the Astin study for the entire length of Page Brook and with the FOSR data there would be documentation of a karst stream to which other karst streams could be compared. Such a study could result in a dramatically improved basis for determining whether or not many streams rising in a karst geologic environment are in fact impaired and if so, what Best Management

Practices are needed to correct such impairments.

Thank you to all our volunteers for your dedication to FOSR and to the Shenandoah River. 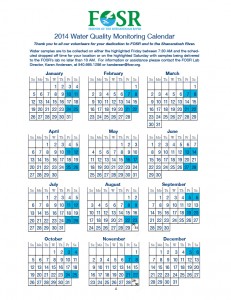 Water samples are to be collected on either the highlighted Friday between 7:30 AM and the scheduled dropped off time for your location or on the highlighted Saturday with samples being delivered to the FOSR’s lab no later than 10 AM.

For information or assistance please contact the FOSR Lab Director, Karen Andersen, at 540.665.1286 or kandersen@fosr.org.

Starting in 2008, several community meetings were held on the Blue Ridge of Jefferson County to help create a vision of these mountain communities in years to come. The meetings were well attended by approximately 350 mountain residents.

With the new Chesapeake Bay pollution diet restrictions (TMDL) looming, a loud consensus was heard from these meetings, “What is in the Shenandoah? And did we put it there?” Mountain community members are not known for agreeing on much, but this theme was heard throughout the community meetings. In April 2011, the Blue Ridge Watershed Coalition (BRWC) was formed to begin the arduous process of fixing 50-year-old problems that affect water quality in the mountain watershed.

A Governor’s Community Participation Grant was awarded to the BRWC with the help of Senator John Unger. With the grant, continuous turbidity meters were purchased to help with state of the art water monitoring of the Shenandoah and the Blue Ridge watersheds. The meters take continuous readings every 3 seconds with the help of laser. These readings measure the turbidity or amount of sediment in our sampling locations.

The Jefferson County Commission voted to match and surpass the $10,000 Governor’s grant to allow the BRWC to test 6 sites on the Blue Ridge mountain, and 3 sites on the Shenandoah River with training and analysis by the laboratory at Shenandoah University established and funded by the Friends of the Shenandoah River. The Friend’s lab and its protocol, run by Karen Anderson, is approved by the EPA making the BRWC’s results very valuable. The $15,000 match supplied by the County Commission will cover the training of water monitors, and the lab fees for one year. The monitoring project is funded through March of 2014.

Training has begun for the BRWC and some friends living on Elk’s Run in Jefferson County. Volunteers will have training completed and will begin sampling May 2013. With the data gained from the turbidity meters in conjunction with water level readings from the USGS gauge at Millville, the actual TMDL (Total Maximum Daily Load) will be calculated making Jefferson County one of the few watersheds in the Chesapeake Bay watershed that has an actual TMDL model based on fact, and not computer generated models.

Posted on May 2nd, 2013 in Featured, Monitor Training

....Clarke County has been actively involved in water quality protection for the past 3 decades. ....the County has relied heavily on the Friends lab and volunteers as an active partner in this effort. ....the County was actively involved in several F ederally funded stream restoration projects.... W e utilized the FOSR lab for all sample analysis and found them to be professional, accurate, and expedient with both the analysis and reporting.
....the Friends of the Shenandoah is a strong grassroots organization that provides a valuable service as stewards and watch dogs of our water resources. We look forward to a long and continued working relationship with the Friends.