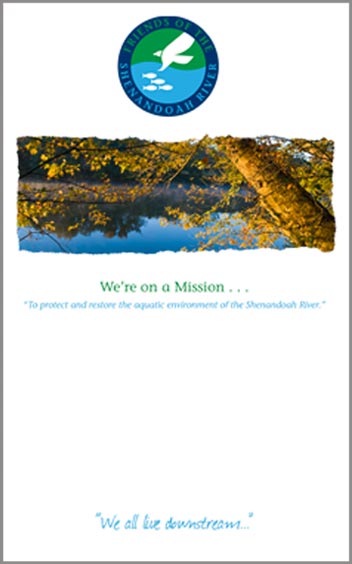 What We Do and Why

The group was founded in 1989 by a group of like-minded Shenandoah Valley citizens and scientists concerned about the rapid decline in water quality of their beloved Shenandoah River. While the fish kills of the 80’s and 90’s would not compare to those of the next decade (which depleted 80% of the adult smallmouth and sunfish populations), the danger signs were all too evident: industrial pollution from the Avtex Fibers plant; sediment and fertilizer runoff; livestock polluting the feeder streams; water turbidity; lesions and sores on fish; the stench of under-treated sewage. Clearly, action was needed, but where to begin? This nucleus of science-minded Friends knew just where to start—with the science.

Launched in 1989, the FOSR grass-roots water quality monitoring and testing program was the first of its kind in the Chesapeake Bay Watershed. Today, in its 23rd year of continuous operation, the program deploys 72 FOSR volunteers who wade in, literally, with bi-monthly water samplings along 150 miles of the Shenandoah and its tributaries, from Port Republic, VA to Harpers Ferry, WV. The samples are processed through a full-time FOSR laboratory at Shenandoah University, resulting in a huge and invaluable database of sampling

Is There a Problem?

Friends of the Shenandoah River believes that it is time for our beautiful river to be treated as something more than a means of carrying away the wastes of our society. The Shenandoah River has been adversely affected by point source pollutants such as industrial wastes, inadequately treated sewage, and solid wastes; and by non point source pollutants such as agricultural and urban run-off and erosion from poor sedimentation control.

The Three Major Threats to the River

1. Sedimentation – or erosion causing “muddy water” which is hard on aquatic life (think of us trying to breathe in a smoky room) and blocks life sustaining light from reaching underwater plant life. All exposed soil is subject to erosion causing sedimentation. Examples are large construction projects, plowed fields on hilly land, and livestock breaking down stream banks.

2. Nutrient loading – or too much fertilizer (mainly nitrogen and phosphorous) getting into the water causing excessive algae growth. When the algae dies the decomposition process steals life sustaining oxygen from the water. For example, the oyster harvest in the Chesapeake Bay is currently only one tenth of one percent of what it was in the year 1900. Agriculture in general, and the poultry industry are major contributors of excess nutrients.

3. Industrial discharges – over the past thirty years industry has done a much better job of treating waste water with the establishment of the Environmental Protection Agency and the passage of the Clean Water Act by Congress. However, we are still suffering from past industrial excesses. Two fishing advisories exist warning against eating fish contaminated by Mercury (toxic to humans) spilled by the DuPont Plant in Waynesboro over a half century ago, and from eating fish contaminated by PCB’s (carcinogenic) from the Avtex Fibers Plant in Front Royal which was closed in 1989 due to pollution of the river. For the most part industry is responsible for monitoring itself (not unlike the fox guarding the henhouse). Fortunately, most industries today recognize the importance of the appearance of a strong environmental stance in the creation of their public image.